OnLoad 2.0 was the first hackathon I was a part of, and it was a great experience for me! OnLoad 2.0 was conducted by the students of Vidyavardhaka College of Engineering, Mysuru. I'm going to share my amazing experience at the hackathon and at the beautiful city Mysore.

It all started when a friend of mine attended a hackathon and shared the experience with me. I felt like I should also try once, so I opened Devfolio and applied for two hackathons, out of which one of them was this one and I received a mail that I got selected!

Yeah, so when I got selected for OnLoad, I was really very happy and a bit nervous too because firstly I didn't have a team and also I'd miss the cultural fest 'Incident' at my college during the same time, which happened to be the greatest and the best of its versions till this year, and maybe even better than its upcoming editions since this year it was the Diamond Jubilee year for my college, and I badly wanted to attend the fest.

I wasn't really sure about attending the hackathon until I talked to the OnLoad organizers and found out the information about how many people from my college actually got selected for the hackathon, then I literally connected to all of them on Linkedin and finally formed a team. My friends always tried their best to stop me from attending the hackathon because they wanted me not to miss the college fest, even I wasn't wishing to miss that. Finally, I chose to attend OnLoad. 😉

When I reached Mysore with my college mates, whom I got introduced to just a day back, it was around 5 in the morning, we encountered a drunk guy who followed us for like more than half an hour and it's a funny story which I feel I shouldn't elaborate here, Hehe :p

So we reached VVCE and got our ID cards issued and put our luggage in the room where we were staying. Then we went for the talks. The talks included many useful information so the talks session was pretty good. I was loving the weather over there!

The hackathon began at night, my teammates and I started to work on the idea we had decided, and meanwhile had fun activities during the hackathons, where one of my teammate and I were the winners and we got $25 GITHUB coupons! 😍
The next day we worked the whole day, and also visited the VR (Virtual Reality) setup room, which was my first experience with AR-VR, and I swear I can't explain how amazing it was!!! It was so relaxing, peaceful and so much fun! I always wished to experience something like that. I'd heard about that but never had that great experience before. It was worth missing the college fest. :P

I met so many amazing people there, including the participants, the judges and the organizers, interacted with them, and also made some new friends. It was really great to know about their prior experiences, some of them were the winners of many hackathons, and some had even attended more than 15 hackathons, some people started hacking before 10th standard only. Listening to all these facts was fascinating! I felt so motivated and had made up my mind to learn new skills and to try doing innovative hacks by myself. We also clicked crazy photos with weird wigs!

Our project was ready and working all good last night. We named our project CamSafe, it's basically a smart intruder preventive platform which primarily uses CCTV camera and sends corresponding alert information to the owner once it detects an intruder. The next day, we had judging. My team's model couldn't work well as it was camera based and the morning light was too bright for our model. Then we had tasty pizzas. We couldn't get selected for top 9, but that's fine, the thing which matters is that we got to learn many new things and met so many amazing personalities there.

People with great minds and innovative ideas presented their works, that was so informative that anyone would get goosebumps listening to them. I feel so thankful for the OnLoad team for having me there! It really was a great memory for me.

Mysore is indeed the ARTIFICIAL HEAVEN!

After the hackathon got over, my friends and I left for the hotel where we had booked rooms, kept our luggage there and roamed around the city Mysore ❤️, the weather there, is very similar to Bangalore's, i.e. natural AC weather, only difference is that Mysore had negligible pollution as compared to that at Bangalore.

We drove for about 22 km and reached Brindavan Garden at night, which is no less than heaven at night! The next day, we went to Mysore Palace and then to the Zoo, and clicked so many pictures and those memories are lit. At night we left for coming back to college. After coming back I shared my experience to all my friends, showed them photos, and felt so good that Mysore trip was worth missing Incident fest. I came back to Mangalore the next day, along with so many goodies, T-shirts, new friends and a lifetime memory!

I always get a big smile on my face whenever I recall about this trip. :) 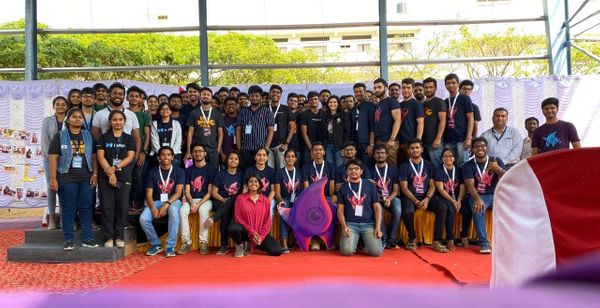 My eyes lit up when I got the invitation to OnLoad 2.0. Around a year ago, I had been disappointed at being rejected and made up my mind that I will go to the next edition for sure. Was the wait worth it? Read on to find out.