My eyes lit up when I got the invitation to OnLoad 2.0. Around a year ago, I had been disappointed at being rejected and made up my mind that I will go to the next edition for sure. Was the wait worth it? Read on to find out.

The road to OnLoad

My journey to Mysore from Goa began on Thursday the 27th of February. We had to take a 6.5 hour long bus ride to Hubbali. Kudos to KSRTC for no longer keeping the unique decoration (red gutkha spit stains) on the last seats as I remember from my childhood trips. The ride was beginning to get comfortable when the driver decided to accelerate over a rough stretch of road, close to Belgaum. This ensured we reached Hubbali with half of our backbone missing. Less weight to worry about in the rest of the journey.

At Hubbali, we witnessed a problem that startups like Uber face when they try to capture new markets: We booked an Uber Auto to the railway station. Before crossing even one junction, he was confronted by two local auto drivers and was made to abandon the ride. Pretty sure such issues can't be solved just by code.

Anyway, this less than pleasant impression of Hubbali was somewhat improved by the beautifully built railway station where we boarded our overnight train to Mysore. After having his name pronounced yet again as Satish (this was the 5th instance in two years) by the T.C, my teammate Saiesh soon fell asleep in our AC coach. I'm a late sleeper but the magical vibrations of the upper berth soon cast their spell on me and I fell asleep too, managing to wake up just before we reached Mysore at 7.30 A.M.

As we entered the city, I wanted to show off to my teammate how well organised the bus system is, in Bangalore and Mysore compared to our home state where private buses operate more by their mood and less by their schedule. I pulled out my phone, entered VVCE as the destination while ignoring his pleas to take an Uber and zeroed in on bus 303(IIRC) to board. To my surprise, it arrived about 3 minutes earlier than expected. Wondering if Google maps was lagging, we boarded the bus and soon found out the answer: we had boarded the correct bus in the opposite direction. Thankfully the lady conductor was kind enough to let us disembark at the next bus stop (for free) and told us which bus numbers to take from which stop. Normally, I would not have understood her Kannada but after you've made a big mistake you can somehow understand any language in the world.

At the bus stop, we met a first year student of VVCE which confirmed we were headed in the right direction. With him by our side we reached the college without any more incidents only to stumble upon our next incident. The guard wouldn't let us in, because we had arrived at the back gate. Thankfully again, the organizers were prompt in their response and got this issue resolved. After the check-in, we were led to the accommodation area and then served a hearty breakfast. By hearty I mean they filled your plate to the brim. I thought this was unique to our first meal there to make us feel welcome. I was wrong. Over the next three days, they consistently managed to fill our plates with yummy food. And the food was cooked right next to the venue. You could taste the homely aspect of all 3 servings of the day.

Takeaways from the Talks

Friday's event began with a number of talks. Let me attempt to summarize the talks in bullet form:

1. How to dodge roadblocks in the way of becoming an amazing developer?

3. Awesome hackathons and how to win them

4. Getting started with OSS journey

The hacking began after that night's dinner. We chose to target the rural population as the focus group. We planned to build a portal to connect rural students with volunteers who would be willing to assist them in learning necessary life skills. We zeroed in on digital literacy for our MVP. The volunteers would be rewarded for their efforts through Blockchain. In hindsight now I realize we were very tired that night by all the travel and should have gone to bed earlier. The lack of sleep was severely hampering our brainstorming speed.

The next day the hacking continued. From the start, I could sense the vibe that this particular hackathon was on a different level than the ones I had attended before. Anyway we continued working on our app ignoring the other teams and spent the day all on the hacking

On Sunday we had reached our max capacity to deliver. There were still a lot of functionalities lacking but we were satisfied with at least how it looked. I took some time to interact with other hackers. We got done with our judging before lunch (surprisingly on schedule, from our experience at some previous hackathons). An important insight shared by the judges that I still carry to this day: as much as possible try to build upon already existing technologies rather than creating an alternative from scratch.

Post lunch we realized coming to the hackathon was indeed worth it. The finalists projects were mind blowing!  My favorite hack was a browser plugin that let you video chat from any website. It used webrtc as it should be and I believe can go a long way if implemented properly. I loved this project even more than the eventual winning entry. We made our way to Bangalore for the next hackathon feeling like our perspective itself had changed in terms of what can be built in two days. We missed out on an opportunity to visit the Mysore Palace by staying back to witness the final presentation. But in retrospect, this choice benefited us a lot. The paradigm shift after witnessing the achievement of the finalists will inspire me throughout my life to aim higher.

As for VVCE as a college, we were left with a great impression. The campus is well built. The faculties seemed super supportive. Their syllabus is modern and overall you could see why this is a NAAC 'A' graded college. The care and the effort they put into hospitality was overwhelming.  I would love to be here again at OnLoad 3.0. Already waiting for the next edition to be announced!

Connect with me on linkedin 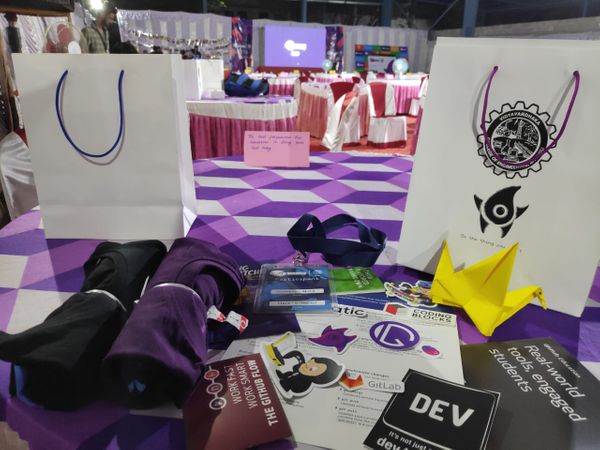 OnLoad 2.0 was the first hackathon I was a part of, and it was a great experience for me! OnLoad 2.0 was conducted by the students of Vidyavardhaka College of Engineering, Mysuru.

Take a trip down memory lane and re-live OnLoad 2.0.